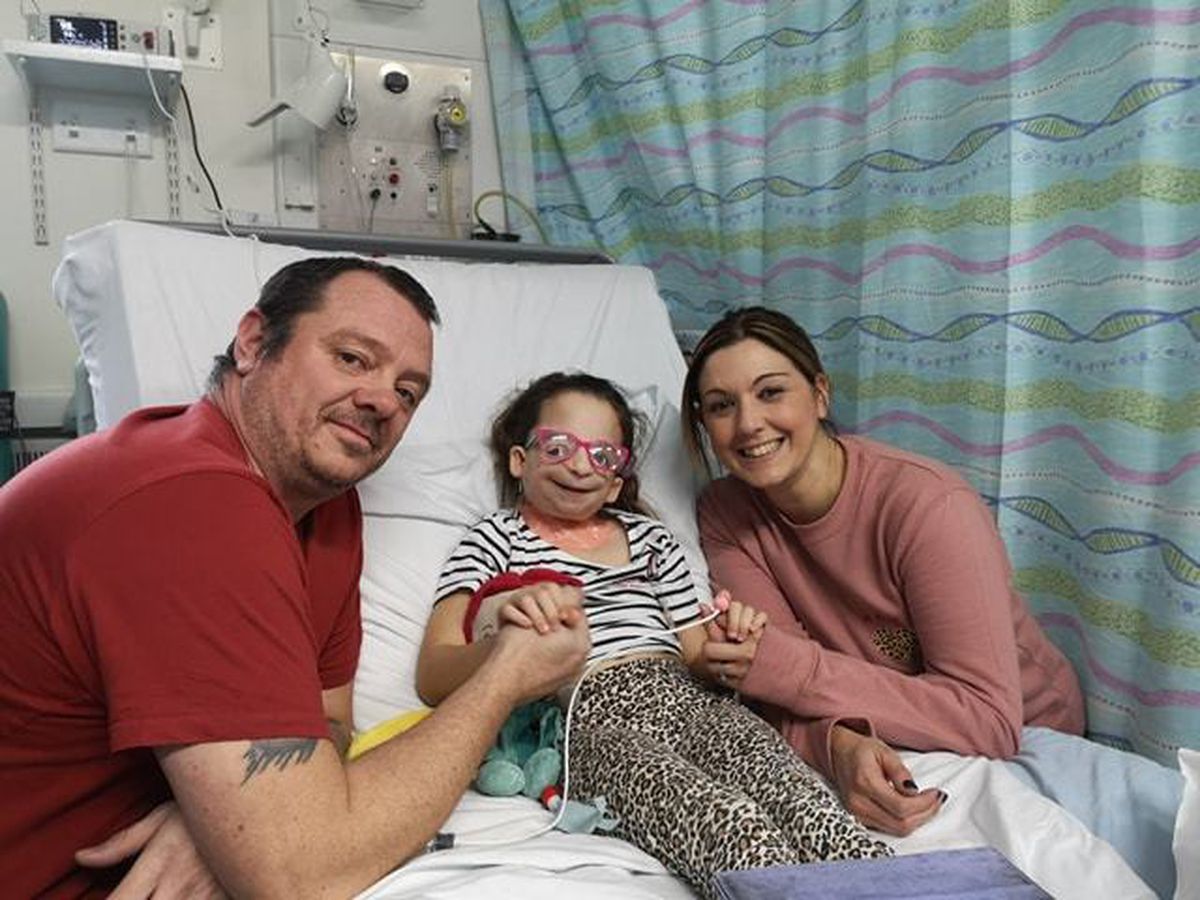 Categories: In the News

Christmas will be that extra special for an eight-year-old and her family thanks to a life-changing piece of surgery – the first of its kind ever performed in Europe.

Abi Tomkinson, from Cannock, was born with Treacher Collins Syndrome (TCS), a rare genetic condition that affects the development of bones and tissues in the face before birth. The condition, which is estimated to affect one in 50,000 people, received international attention through the 2017 film Wonder.

Abi’s condition not only affected her facial features but also her airway too, which meant at just three months old she was transferred to Birmingham Children’s Hospital when its dedicated Ear, Nose and Throat team performed a life-saving tracheostomy procedure that involves an opening being made at the front of the neck for a tube to be inserted into the windpipe to aid breathing.

Her mother, Amanda Tomkinson, said: “When Abi was born her condition was a complete surprise but due to the expertise and sheer dedication of Birmingham Children’s Hospital following, what can only be described as a horrific first three months of Abi’s life, they saved her life.

“From that moment, life was never the same and we prepared ourselves that the ‘trachy’ life would remain with us until Abi’s late teens if not longer.”

Despite things improving, due to her TCS Abi found it difficult to speak and eat without support throughout her life.

In 2018, Abi’s family were approached by the hospital’s Kevin McMillan and Rhodri Williams, consultant oral and maxillofacial surgeons, who discussed a pioneering surgery – Subcranial Rotation Distraction. Previously only carried out in the USA, it involves multiple procedures to improve a patient’s airway in the hope of enabling tracheostomy removal.

Over an 18-month-period Abi underwent four operations, which included the main procedure in August this year, which took six hours combining two procedures.

The major operation involved detaching Abi’s face from her skull and performing a controlled break in her lower jaw. Following this, Abi wore three distractors (two on her lower jaw and one on her skull) for around two months.

During this time Abi’s jaws were wired shut and her parents turned screws that gradually lengthened and rotated her jaws. The result of this enabled Abi to grow new bone and improve her airway space, which ultimately meant Abi no longer needed a Trachy to breathe safely.

This festive period will be will be the first in her life when Abi will be able to breathe on her own and enjoy a more independent life like many other children of her age.

Amanda, who has fundraised for the children’s Hospital Charity for a number of years by taking part in the Wolf Run, half marathons and abseiling events, added: “I cannot thank Kevin, Rhodri and everyone at the children’s hospital who has been part of our little girl’s journey, including Ms McDermott who carried her first procedure aged just three months.

“They saved her life and have now given a new lease of life.”

“This successful procedure has completely changed things in a way we could not have imagined. Abi’s speech is much clearer; in fact she’s very loud. It truly is amazing to see our daughter growing just like lots of other eight-year-old girls.

“She can now do all the things she has missed out on like swimming at school instead of watching and she can enjoy sleepovers with her friends. We’re looking forward to making so many life-long memories and hoping to book a trip to Florida so Abi can fulfil her dream of swimming with dolphins.

“Christmas will certainly have a new meaning in the Tomkinson house and we genuinely believe miracles really do happen. This year we’ve been given the best Christmas present ever. Santa really is real, just in the form of Birmingham Children’s Hospital.”